Originally written for use at Gen Con Indy 2013, Binding Contracts, Falling Star, Shedding Light, and Salvaging Solace are adventures for Warhammer 40,000 Roleplaying. The four linked scenarios concern the fate of the Imperial world of Solace. While each adventure stands on its own as a complete module suitable for immediate play, a group that plays all four adventures will spot the connections between the events as they transpire around the hive world of Solace.

Each include a full adventure, pre-generated characters, and the profiles for any NPCs unique to the adventure. Each is designed to be run with the system for which it was written and requires a copy of the appropriate Core Rulebook to play.

Binding Contracts is a Black Crusade adventure which follows a group of Heretics as they pursue the prophecy of the Many-Eyed, a dread oracle of Chaos. The Ruinous Powers have whispered to her that Solace will end in fire when a star descends from the sky. They murmur that the terror and confusion this event brings about must be properly dedicated to the Chaos Gods.

Before this portent appears, the Heretics must infiltrate Solace and rally the wretched mutants that live beneath the hive. Then, once the star burns bright in the sky, they must lead their newly assembled army up one of Hive Solace’s spires, where they can cast down a rival sorcerer and take control of his ritual to summon a Daemon of unfathomable power to the Materium. If they succeed, the Heretics will have struck a blow against the Imperium within the Calixis Sector and won vast glory for themselves. If they fail, however, the unholy ritual could be their doom. 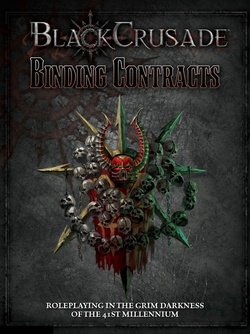