After centuries lost in the Warp, the Ardent Crown has returned in a degrading orbit around the world of Solace. This vessel vanished carrying a number of important relics, and in this Deathwatch adventure, a Kill-team has been assembled to board the derelict as it drifts toward the world of Solace, secure the sacred artefacts, and extract from the voidship.

However, the Battle-Brothers are not alone in their ambitions aboard the Ardent Crown. An Eldar Farseer also has designs for a particular relic, and leads an elite team of her allies in her quest to take it back. And while the Eldar are powerful and duplicitous foes, something even more terrible lurks aboard the Ardent Crown, stirring after aeons of cold slumber as footsteps fall once again on the long-abandoned decks. The Battle- Brothers of the Deathwatch must face these enemies, cast them down in the name of the Emperor, and escape the Ardent Crown before it plummets to its demise. The fate of the sector and the honour of the Deathwatch alike hang in the balance. 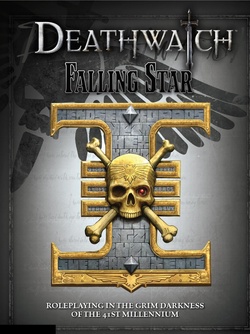 Interior Art
Neil Roberts and the