When an unknown voidship strikes the world of Solace, the surface shakes and the brave men and women of the Cadian 99th must gird themselves for battle once again in this adventure for Only War. Having just suffered losses campaigning in the Spinward Front, the Cadian 99th is caught on the outskirts of the catastrophe in the midst of a training exercise. In addition to the devastation the crash wrought, the impact has sent waves of mutants surging up from the underhive, and so the troopers must step forth into the breach to restore order to Hive Solace.

Unfortunately, this is only the start of the Player Characters’ troubles. As they struggle to bring Hive Solace under control, still more crises loom over them, and the troopers must go above and beyond their normal duties to have a chance of survival. With the lives of everyone on the planet—including their own—resting on their actions, the PCs are the last line of defence against the coming catastrophe. If they do not rise to the occasion and triumph against the odds, there will be no saving Solace. 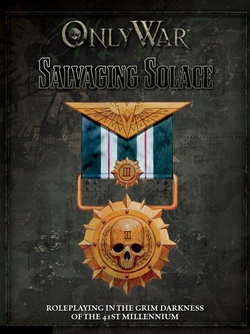