In this adventure for Rogue Trader, the Explorers delve deep into the ancient secrets of Solace. Solace was colonised by the Imperium in the final hours of the Angevin Crusade to unite the Calixis Sector, but its secrets wind perilously back into times forgotten by all but the most ancient. There have always been dark tales in Solace’s mines about the things that dwell beneath the world’s parched surface, but there have also been whispers of fortunes beyond the comprehension of any mortal.

These whispers have spread far and wide and have reached the ears of a daring Rogue Trader, a warrior-privateer who braves the dangers of the unknown in the name of incalculable wealth and glory. Now, an avid group of Explorers journey to Solace, delving deep into an ancient chasm that contains strange relics of forgotten aeons. But when a cataclysm rocks the world of Solace, the Explorers find themselves facing a terrible threat that is not pleased about its rude awakening. 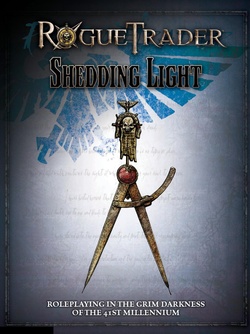