Rogue Trader - Edge of the Abyss

In Edge of the Abyss, a supplement for Rogue Trader, detailed descriptions of the Expanseâs famous worlds allow players and GMs to plan new Endeavours and adventures. Fight across the frozen surface of Lucinâs Breath, plunder the Egarian maze cities, and plumb the secrets of haunted Illisk. Study, negotiate, and war against the inhabitants of the Expanse: xenos races, the vile forces of Chaos, and monolithic Imperial organizations.

The vast darkness of the Expanse brims with legends and secrets. Within Edge of the Abyss are the rare bits of truth you need to explore beyond the Maw. Armed with this priceless knowledge, plot your own course to adventure and profit! Study, negotiate, and war against the inhabitants of the Expanse: xenos races, the vile forces of Chaos, and monolithic Imperial organizations. Learn of six legendary Rogue Traders, each a potential ally, enemy, or source of valuable information. Play through a complete, full-length adventure that pits Explorers against bloodthirsty xenos and offers the chance to plunder lost artefacts of the Egarian Dominion.

Edge of the Abyss offers in-depth descriptions of several important locations in the Expanse, including some never-before-revealed worlds. Additionally, youâll find background information, statistics, and ships for the most powerful alien races and organizations of the Expanse.

With adventure ideas, location guides, and much more, Edge of the Abyss is an invaluable resource for GMs and players alike. 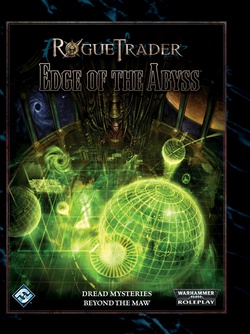 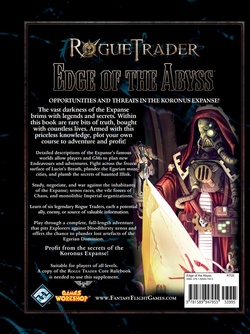